Cruises from Stockholm depart in the summer.

Spanning numerous islands in the Baltic Sea, Stockholm boasts a bevy of attractions within its waterfront setting. Wander the Old Town district, known as Gamla Stan, to see Stockholm Cathedral, the changing of the guard ceremony at the Royal Palace and the Vasa Museum, home to the world’s only preserved 17th-century warship. Tours of City Hall reveal where Nobel Prizes are awarded, and a nearby museum delves into the history of this accolade and the laureates who have claimed it. Escape into nature with a cruise down the Djurgarden canal, or spot sea eagles on a kayaking exploration. The region is home to three UNESCO World Heritage Sites: Birka, an archeological outpost once ruled by Vikings; the Woodland Cemetery, with its remarkable landscape architecture; and Drottningholm Palace, the private residence of the country’s royal family. 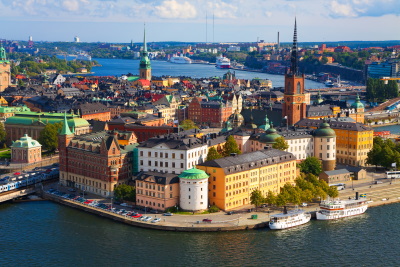 Driving from Stockholm Arlanda International Airport: Follow the signs "E4 Stockholm", when you get close to the North area of Stockholm you follow the signs with a symbol of a ship on to Frihamnen. The port is better known as Värtahamnen but the official name is Frihamnen. Upon entering the cruise port the ships docked at Frihamnen will be on your right and the ships docked at Vartahamnen will be on your left.

Call us at 800-338-4962 or inquire about a vacation here.
Open Mon-Fri 8am to 8pm, Sat-Sun 9am to 6pm, U.S. Central Time
Departure Ports
Amsterdam
Copenhagen
London
Southampton
Stockholm